A downloadable game for Windows

This is another summer project I did with a new team in couple of months. I've never personally tried to recreate any games, but this time we decided to try to recreate Hotline Miami to see and learn why some things were made like they were.

Even though I'm a programmer, I've always had a soft spot for pixel graphics, and ended up doing a lot of the animation seen in the game on top of programming stuff.

We were planning on making multiple stages, but really only got 1 or 2 done.

Story
Marko is typical finnish man who enjoys the simple things in life like booze and gambling. But when the slot machine eats last of his money, he goes on a rampage and decides to get his revenge on RAY who owns the slot machines in Finland. The idea was that each level was one floor on the office building, and goal was to get to the top to kill the president of the company.

Goal and Mechanics
Goal of each level is same as in Hotline Miami, which is to kill everybody on the floor before you continue to the next one.

We tried to make the whole level feel interactable, so you could use everything in the environment something to use in battle, which is why you can pickup and throw every houseplant and chair and toilet etc.

We also wanted to make this more melee based than Hotline Miami is, which is why we added bottle of booze. After drinking booze, Marko is invincible to any damage, but throwing things and using guns is impossible since it's hard to aim while drunk. So the best bet is to use melee weapon or just your fists to kill enemies 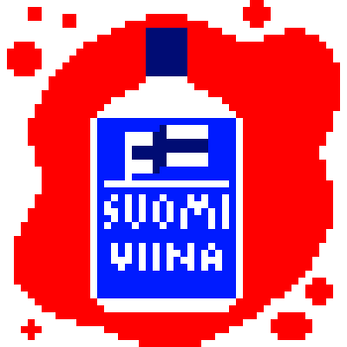